About the HHP Centre

Centre for the History of Hermetic Philosophy and Related Currents (HHP)

Ten years of research and teaching Download our 2009 anniversary volume!

Situated within the Faculty of Humanities of the University of Amsterdam, the Centre for the History of Hermetic Philosophy and Related Currents (HHP) is the world’s leading institute for academic research and teaching in the field of Western esotericism. We are currently the only centre in the world providing a complete academic study program in the history of esotericism, from the Bachelor to the PhD level. Our international and interdisciplinary research group delivers cutting-edge research on esoteric currents from the Renaissance to contemporary times. Our students are invited to engage with ongoing research through teaching modules and tutorials in the MA program. Find out more about our current research projects as well as about how to apply for our study program by following the links on the right. 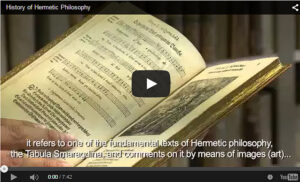 The HHP Centre was founded in 1999, and is currently well into its third decade of research and teaching in the field of Western esotericism. It did not emerge in a vacuum: since its inception, the centre has been part of a broader international network of scholars dedicated to establishing esotericism as an academic field of research in the Humanities. Before the HHP Centre was founded, there already existed a professorial chair dedicated to the “History of Esoteric Currents” at the Sorbonne in Paris, then held by Antoine Faivre. HHP became the first centre to offer a teaching program to Bachelor and Master students. A number of other departments now offer similar modules and courses, but the HHP Centre at the University of Amsterdam remains the only centre with a complete program.

In addition to the current staff, a number of notable esotericism scholars have worked at the centre, including Jean Pierre Brach (now Faivre’s successor at the Sorbonne), Kocku von Stuckrad (now at University of Groningen), and Olav Hammer (now at University of Southern Denmark). In 2009, the HHP Centre celebrated its tenth anniversary with a one-day conference in Amsterdam. Reminiscences, reflections, and impressions by the staff, students and other scholars can be found in the anniversary volume, Hermes in the Academy: Ten Years’ Study of Western Esotericism at the University of Amsterdam (Amsterdam University Press, 2009), which we are happy to offer you as a free download.

In 2019 the HHP Centre celebrated its twentieth anniversary. In connection with this the Anniversary Volume Hermes Explains: Thirty Questions about Western Esotericism was published. The volume was presented to Mrs. Drs. R. Basten, the founder of the HHP centre and mw. prof. dr. ir. K.I.J.  Maex,  Rector Magnificus of UvA at the ESSWE 7 Conference (July 2019) during the Welcome Reception at the Embassy of the Free Mind.
Few fields of academic research are surrounded by so many misunderstandings and misconceptions as the study of Western esotericism. For twenty years now, the Centre for the History of Hermetic Philosophy and Related Currents (University of Amsterdam) has been at the forefront of international scholarship in this domain. This second anniversary volume seeks to make the modern study of Western esotericism known beyond specialist circles, while addressing a range of misconceptions, biases, and prejudices that still tend to surround it.
Thirty major scholars in the field respond to questions about a wide range of unfamiliar ideas, traditions, practices, problems, and personalities that are central to this area of research. By challenging many taken-for-granted assumptions about religion, science, philosophy, and the arts, this volume demonstrates why the academic study of esotericism leads us to reconsider much that we thought we knew about the story of Western culture. 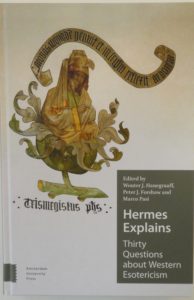 Listen to Marco Pasi being interviewed by Stephanie Shea at Rejected Religion, about the volume (in two parts).