Amsterdam is known for its vibrant student life, and HHP is situated right at the heart of it. Our students do not sit and wait for things to happen: instead they go out and create their own initiatives.

We are blessed with an active, international, and lively student community, rich in initiatives and extra-curricular activities. The result is a number of conferences, workshops, study trips, magazines and even an academic journal, all created by our students. Below you can read about some of the initiatives that have sprung out of the student community surrounding HHP and the religious studies department at the UvA.

Ars Notoria is the University of Amsterdam’s student organization for Religious Studies. Active since 2008, it organizes monthly events for students (films, short excursions, dinners), releases the magazine Notorious, and – in collaboration with staff – an annual study trip abroad. For more information about some of these activities, see below.

We frequently host workshops and mini-conferences for and with our students. Some of our MA courses are concluded by a one-day mini-conference that is open to the public. Students at HHP have also on several occasions organized academic conferences and workshops entirely by their own initiative.

In 2019 HHP was the host of ESSWE 7: the 7th biannual conference of  the European Society for the Study of Western Esotericism (ESSWE). Many students were playing an important role by helping organize the conference, with RMa student Stephanie Shea at the head of the group. RMa Student Andrea Franchetto made the design and layout for the programme. Several students presented a paper which could give them study points. This proved to be a great occasion for students  to meet, talk, and form new friendships with other students and scholars from numerous countries.

During the early spring of 2020 Dr. Stephen Clucas (University of London) and Dr. Peter Forshaw (University of Amsterdam and head of the Ritman Research institute at Embassy of the Free Mind), guided a small reading group, of which a number of students was part, through the intricacies of John Dee’s enigmatic work ‘Monas Hieroglyphica’, which Dee himself claims to have ‘Mathematically, Magically, Cabalistically and Anagogically explained’. Dee’s introductory letter to the Holy Roman Emperor Maximilian II was considered and then the group, looked closely at the 24 Theorems of the text itself, including discussion of the curious diagrams. 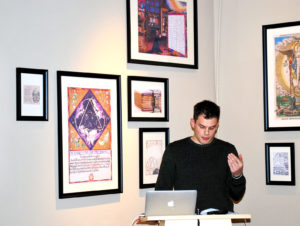 On 14 December 2019 Research MA students from the University of Amsterdam held a mini conference based on their research for the course ‘Nature and the Supernatural’. The conference took place in the Grote Sael at the Embassy of the Free Mind. Each student gave a presentation of approximately 15-20 minutes about such themes as ritual magic, myths from various cultures, and virtual beings.
In the picture is RMa student Andrea Franchetto, giving a presentation.

Two day Conference Esotericism and the Varieties of Transformation 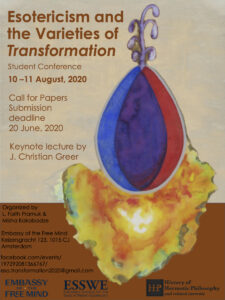 In the summer of 2020 a two-day conference was planned at the Embassy of the Free Mind, Amsterdam: Esotericism and the Varieties of Transformation. In light of the Corona pandemic this event unfortunately had to be postponed. A new date will be published in due course.
BA, MA, and PhD students from all disciplines are welcome to submit paper proposals for 20-minute presentations of their research.

In 2018 and 2019 students were playing an important role in “Museumnacht” at the Embassy of the Free Mind, by helping organize the event and giving presentations. They are encouraged by Dr. Peter Forshaw to develop activities like these. The Embassy of the Free Mind appreciates the students’ involvement.
In the picture is MA student Corey Andrews, giving a presentation.

Between 2010 and 2012 a group of our BA and MA students got together and published the magazine De Hermet. In 2012, this has been absorbed into the student magazine Notorious, published by the Ars Notoria student organization. The content is a mix of student-related news and opinion, papers by students, poetry, and fiction. Some is in Dutch, some in English.

Correspondences: An Online Journal for the Academic Study of Western Esotericism

Correspondences is a fully peer-reviewed, open-access journal devoted to the academic study of Western esotericism. The first issue appeared in June 2013, consisting of research articles by established as well as younger scholars. The journal is an independent academic publication, with editorial board members from eight different countries, but the initiative originally grew out of the Hermet and Notorious community. Two editors in chief, Jimmy Elwing and Aren Roukema, both finished their Research MAs at HHP in the summer of 2013. The third editor in chief, Manon Hedenborg White, currently holds a position as PostDoc researcher at HHP (2020). More than just a student initiative, Correspondences is an exciting new project and a welcome addition to the publication networks in our field. 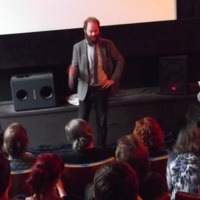 PhD student J. Christian Greer launched Psychick Cinema, a monthly lecture series open to the general public. Hosted at Amsterdam’s oldest independent cinema, the Filmhuis Cavia, Chtistian Greer’s lectures focused on the intersection of popular culture and esotericism, and were customarily accompanied by arthouse films, anime, live music, dance performances, and poetry recitations. The Psychick Cinema is also a platform where the students and faculty of the HHP are welcome to lecture on their own interests, screen films, or otherwise showcase their artistic talents.