International Congress: Western Esoteriscim in and from Latin America 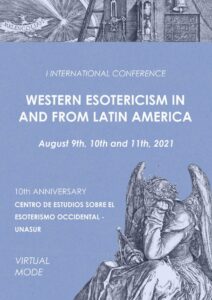 From 9 – 11 August 2021 the Center for the Study of Western Esotericism of the Union of South American Nations (Centro de Estudios sobre el Esoterismo Occidental -CEEO-UNASUR) organizes an online international congress: Western Esoteriscim in and from Latin America.

In august 2011, the Center for the Study of Western Esotericism of the Union of South American Nations (CEEO-UNASUR) was created in order to study the practices, representations and agents of western esotericism understood as a historic­ cultural phenomenon. Since its foundation, the CEEO-UNASUR has gathered researchers and experts on western esotericism to improve its analysis among the Latin-American   academic field.
In this way, the CEEO-UNASUR wants to celebrate its first decade with the I International Conf erence, Western Esotericism in and from Latin America, to be held on 9, 10 en 11 August 2021 . The objectives are: 1) gather together the experts that participated in the development of CEEO-UNASUR; 2) bring up to date the research done by CEEO-UNASUR members; 3) discuss the main difficulties for the study of esotericism in the region and the applicability in Latin­ am e ri ca of the concep ts and methodological perspectives proposed in the field; 4) enter in dialogue with researchers outside of this field who deal with the same topic using up-to-date perspectives in the human sciences.

To register go to the congress page.